Mothers and daughters cooking together is a scene played out daily worldwide. Fatma Mziray, a vibrant 38-year-old woman, and her eldest daughter Zainabu are no exception, working companionably to prepare dinner for their family of eight. 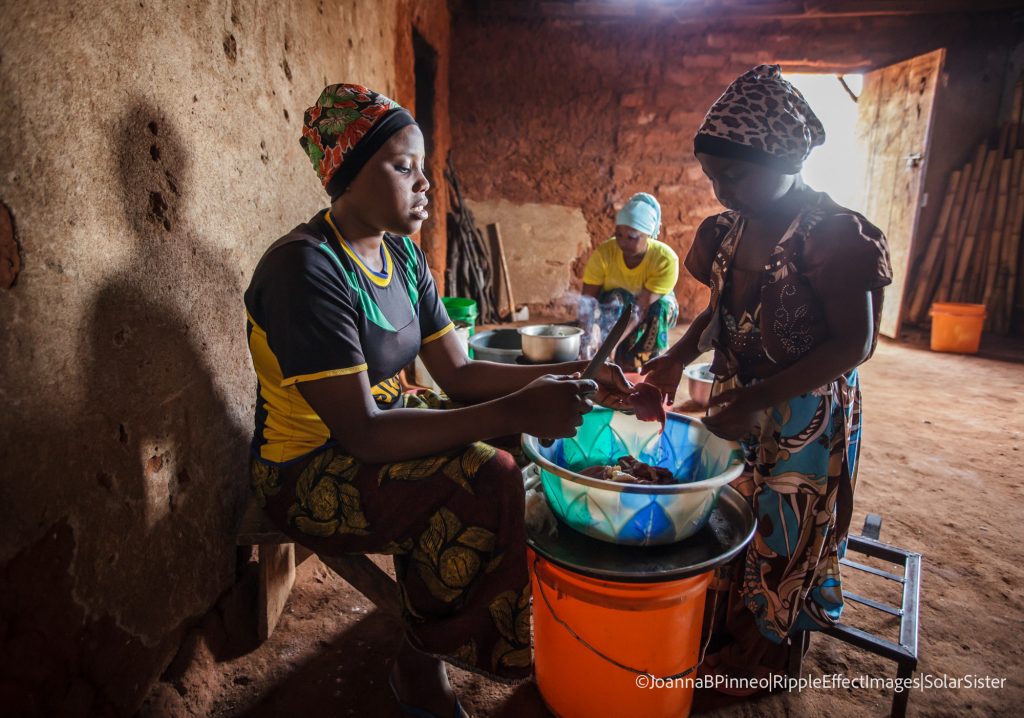 A few years ago, cooking was not a fun time for Fatma. Fatma cooked over a three-stone fire fueled by wood that put off a lot of smoke. In her mid-thirties, Fatma was tired all the time, her lungs were congested, and her eyes stung. Some days she felt so bad she could hardly get out of bed. Her children were often sick with coughing and watery eyes. She had reached a breaking point. After numerous trips to the doctor, he told her that she was breathing in too much smoke and could not continue to cook over an open fire. Fatma didn’t know what options she had until she met a Solar Sister Entrepreneur and learned about clean cookstoves. 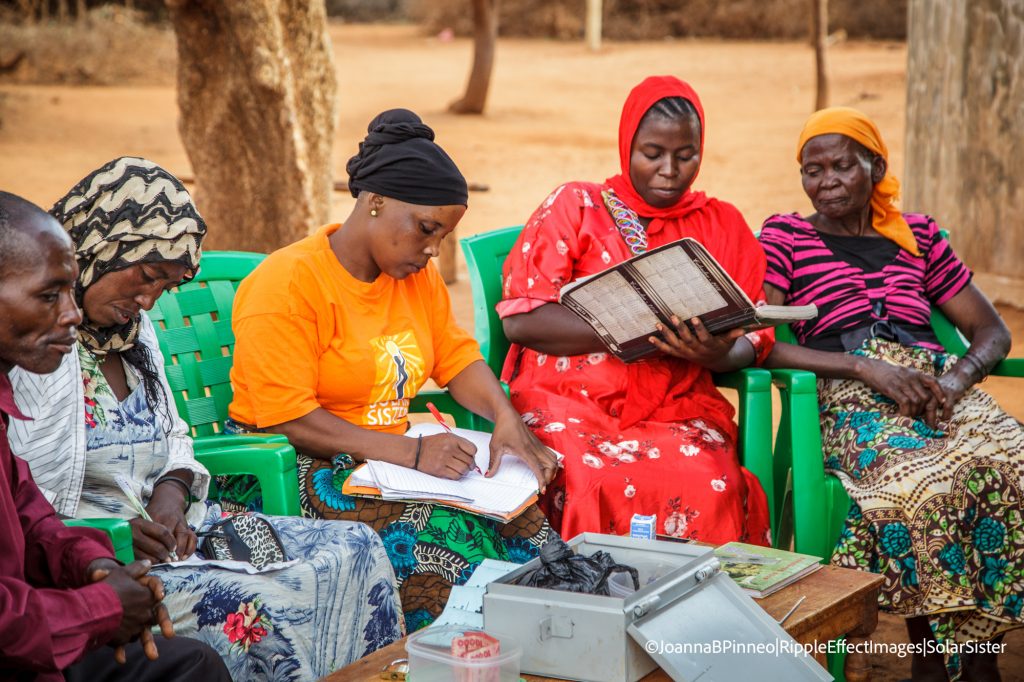 Today Fatma is an active businesswoman, a Solar Sister Entrepreneur, playing a prominent role in her community. She checks to ensure her younger children have completed their studies, tends to their livestock, and runs her successful Solar Sister business.

“Cooking for a family, preparing breakfast, lunch, and dinner I used to gather a large load of wood every day to use. With the new cookstove, the same load of wood can last up to three or more weeks of cooking.  Since using the clean cookstove, no one has been sick or gone to the hospital due to flu.”

Fatma knows she is helping her community because the people she has sold cookstoves to no longer have red eyes, cough, or are sick like they used to be. She helps with the school fees for her children, purchases items for the home and new livestock.

As Fatma told one of her new clients who sold a goat to be able to get an efficient cookstove,

“Well, if you tie your goat outside, he may be gone in the morning, but your stove will still be here.” 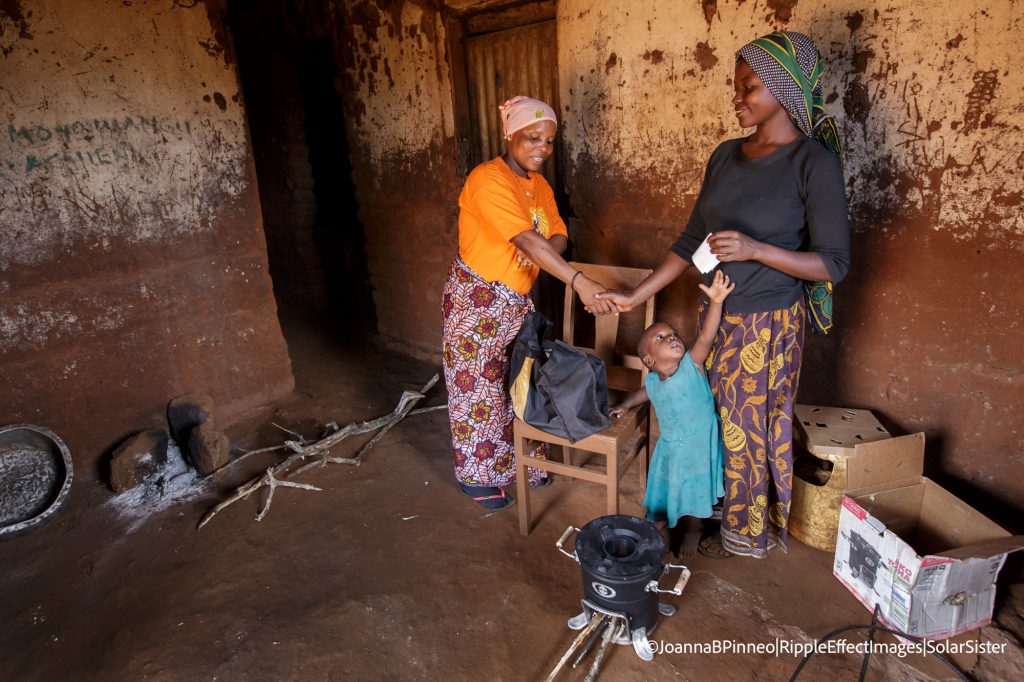 In this VIDEO about Fatma and her family, we highlight the issue of toxic smoke from cooking over an open fire and how Solar Sister  Entrepreneurs are bringing clean and safe cookstoves to their communities.

Globally three billion people still cook over open fires or inefficient stoves. Exposure to HAP from burning wood, charcoal, coal, and kerosene is a leading risk factor for diseases including childhood pneumonia, chronic obstructive pulmonary disorder, ischemic heart disease, stroke, and lung cancer.* In fact, air pollution is the leading environmental health risk globally. 12% of ambient air pollution comes from household air pollution. Over 450,000 children under age 5 die each year primarily in sub-Saharan Africa and Asia, as a result of household air pollution.  In March of 2014, the World Health Organization released a study that estimated a total of 7 million deaths worldwide in 2012 caused by exposure to air pollution – one in eight of all global deaths. Indoor air pollution was linked to 4.3 million of the deaths that occurred in homes that depend on biomass or coal for cooking.  A quick read today on the  W.H.O. site regarding air pollution shows that little has changed since then. As women are responsible in many countries for gathering fuel, water, and food, they often suffer the most when shortages are caused or made worse by the climate crisis.**

Photo captions: Fatma pours steaming hot greens into a bowl while a stew of chicken and vegetables simmers on a second stove (out of the photo).  Fatma’s eldest daughter, Zainabu, age 19 peels vegetables with help from her 5 -year-old sister  Nasma. Fatma presides over the weekly meeting of the community loan share or Village Community Bank. . Fatma closes the natural gate to the pen to keep her cows in at night.  With her income as a Solar Sister entrepreneur, she was able to buy a new cow. Fatma delivers a new clean cookstove to her customer Ester Hodari, age 22., in Ester’s kitchen. She demonstrated to  Ester how the stove works with small amounts of firewood. In the left of the photo are the remains of the fire where Ester has been cooking the meals.