Congratulations and exciting news for Solar Sister Entrepreneur, Kudirat Salieu. She has won the African Solar Entrepreneur of the Year by the AFSIA – the Africa Solar Industry Association. The winners are announced in PV Magazine International, November 17th.

Go back in time to 2020 as the Covid-19 pandemic accelerated. Kudirat’s business almost ground to a halt during that time.

As the crisis hit, she struggled to sell off the solar inventory she had built up. The challenges in the early days of the pandemic affected her finances and morale. Kudirat tried different sales strategies without much success.

Solar Sister entrepreneurs in her region of Kwara State, Nigeria,  including Kudirat,  launched a product fair and a community-based advocacy campaign.  After the fair, her business started to turn around. In the campaign, Kudirat spread the message that adopting clean energy can reduce household energy expenses, which became critical for many families due to the pandemic’s impact on the economy. This message raised awareness about the benefits of clean energy.

Within 48 hours, Kudirat sold off all of her old stock and made a profit equal to her monthly earnings. The advocacy campaign and product fair attracted new customers for Kudirat, opening more opportunities for her business.

Renewed, Kudirat reinvested 80% of her profit and capital back into the business. Now, she has moved from buying two to three small solar lanterns to purchasing products in cartons, including larger solar home systems. She doubled her sales from earlier in the year.

Kudirat’s effort and impact were felt in her community. She received an impactful business award from her community leaders. Kudirat has reached over 80 homes with clean energy in the last two months. 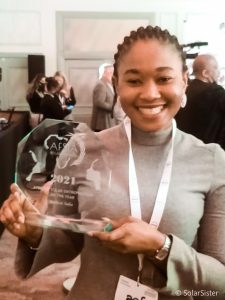 Kudirat was nominated for African Solar Entrepreneur in a Small to Medium Enterprise. The winners were announced on November 16th, 2021 at an award ceremony in London.

Everyone at Solar Sister is proud of Kudirat, who has worked hard to not only maintain her business but to flourish during difficult times